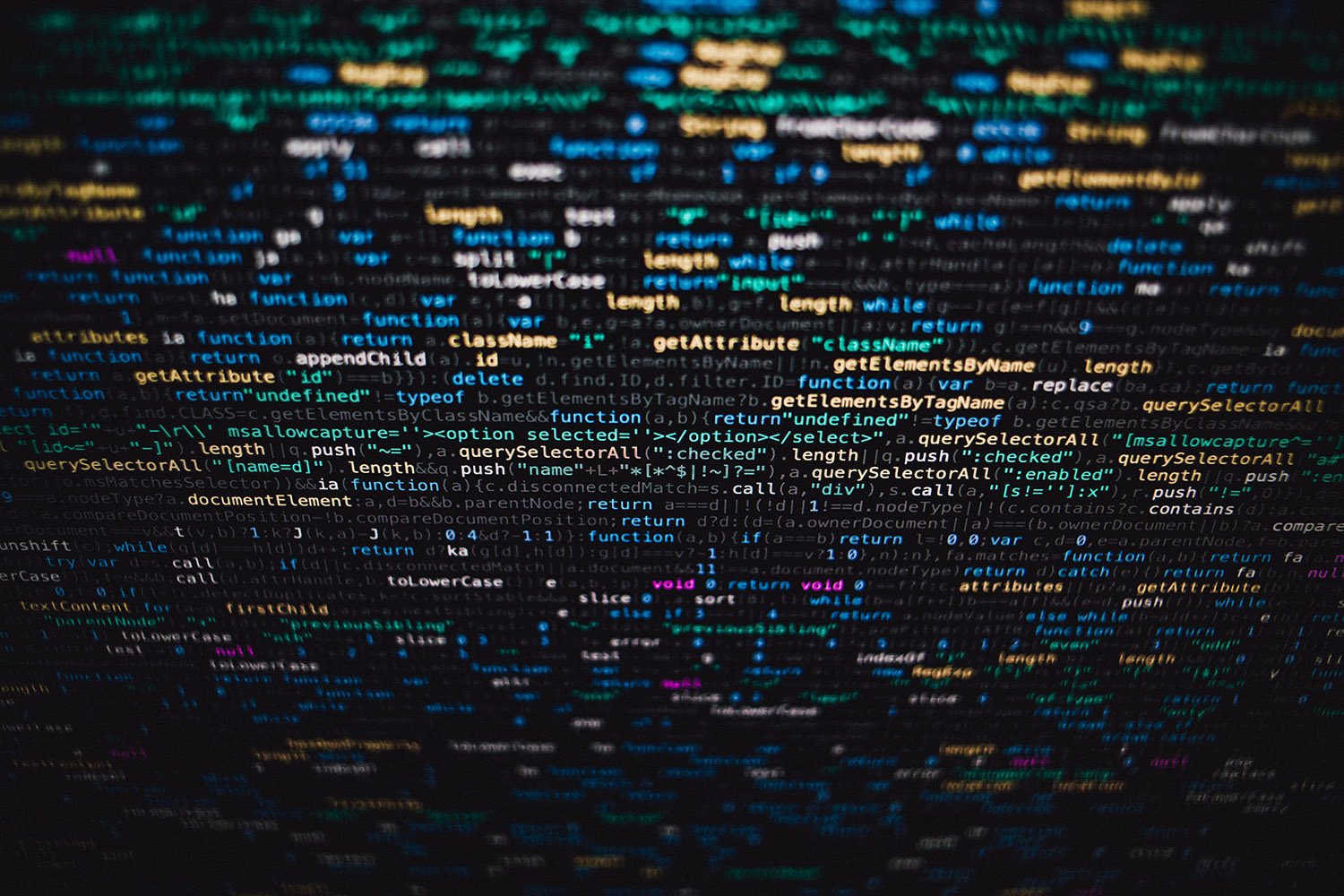 Developer ? Not so popular opinions

These points are also important and cans be translated at architecture / UX / team / ecosystem levels.

But let’s keep it simple with code.

1 — Don’t lie about your promises 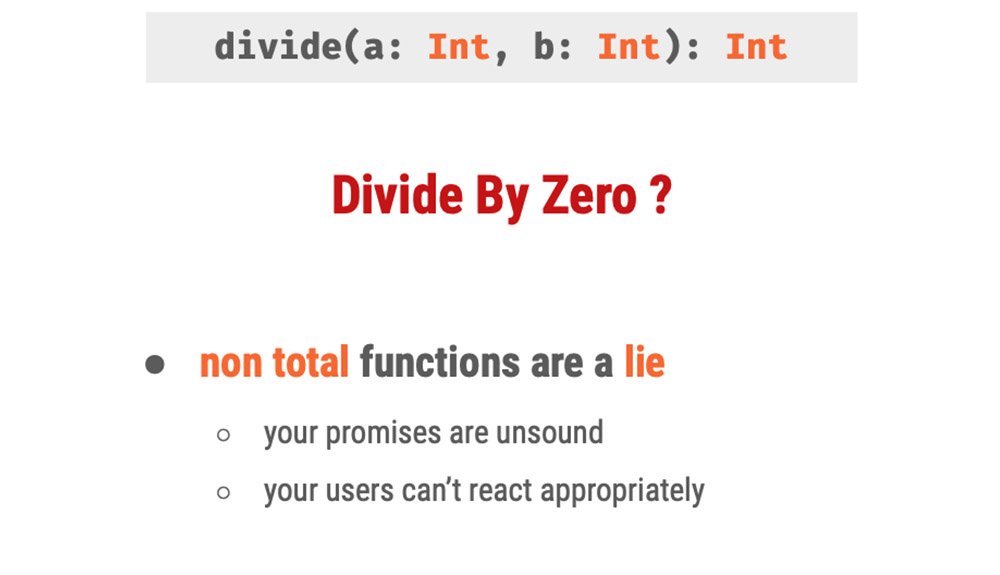 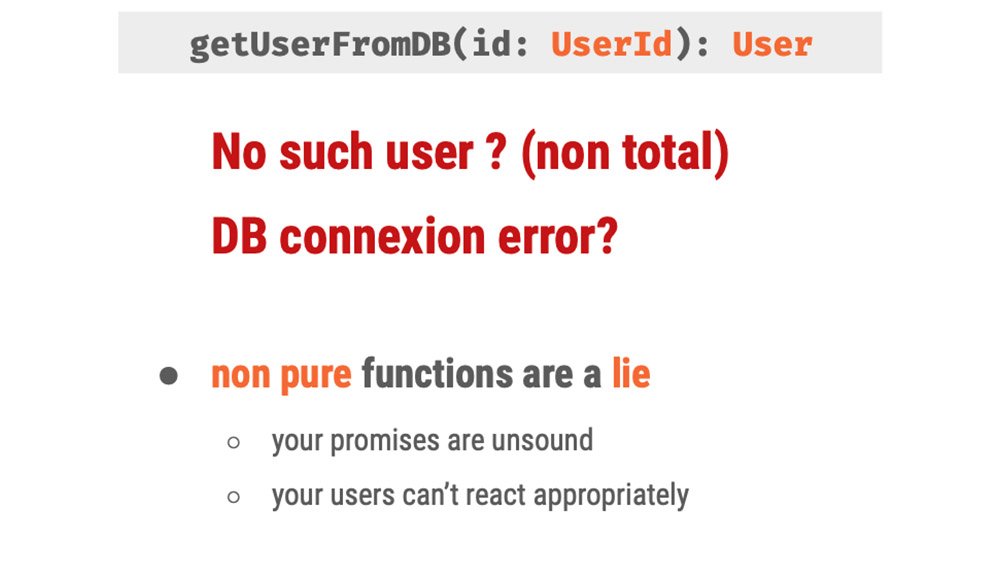 Don’t lie to your users, allow them to react efficiently :

2 — Make it unambiguous in your types

It’s a signal, make it unambiguous, give agency, automate it

Which intent is less ambiguous ? 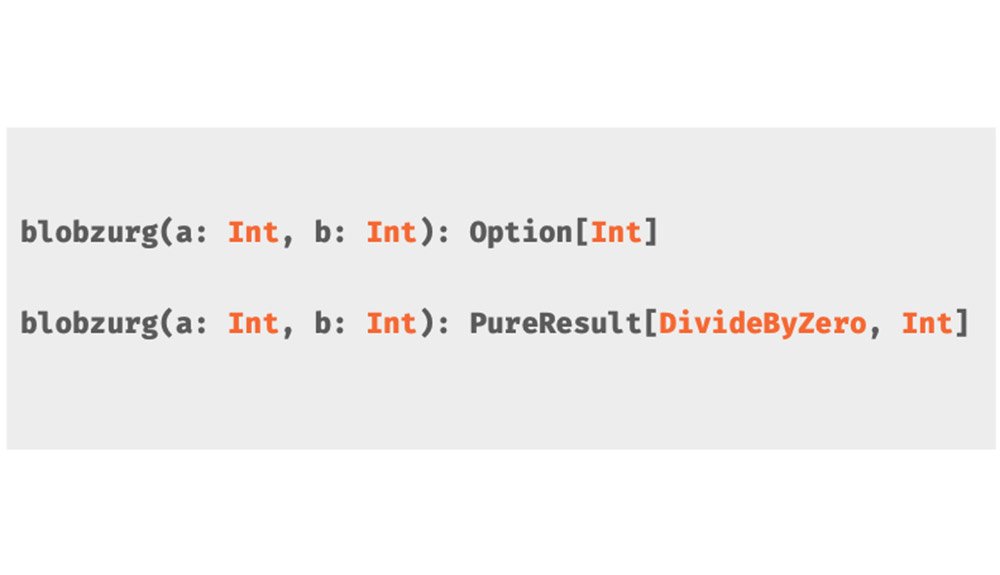 Use the type system to automate classification of errors ?

“A type system is a tractable syntactic method for proving the absence of certain program behaviors by classifying phrases according to the kinds of values they compute.” — Benjamin Pierce 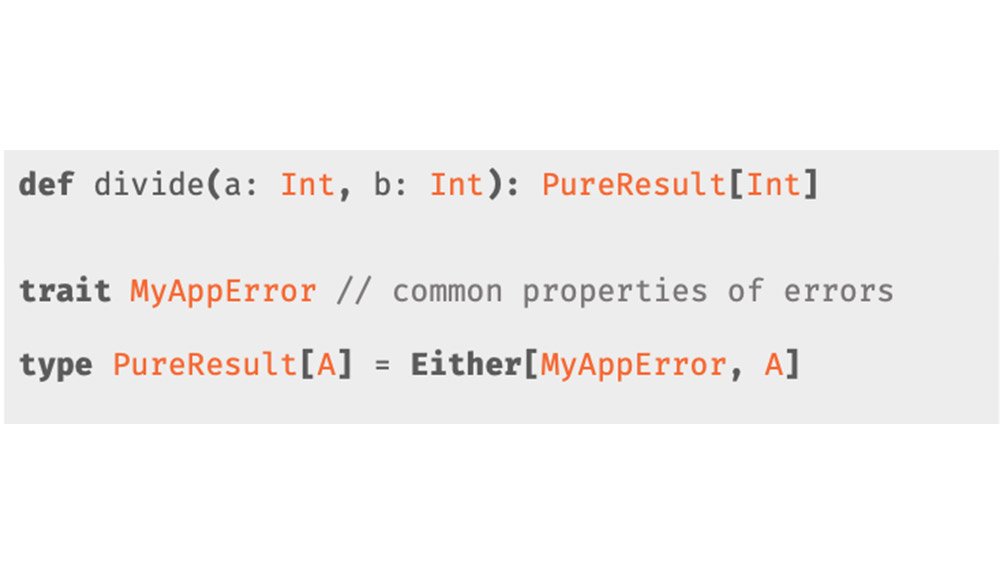 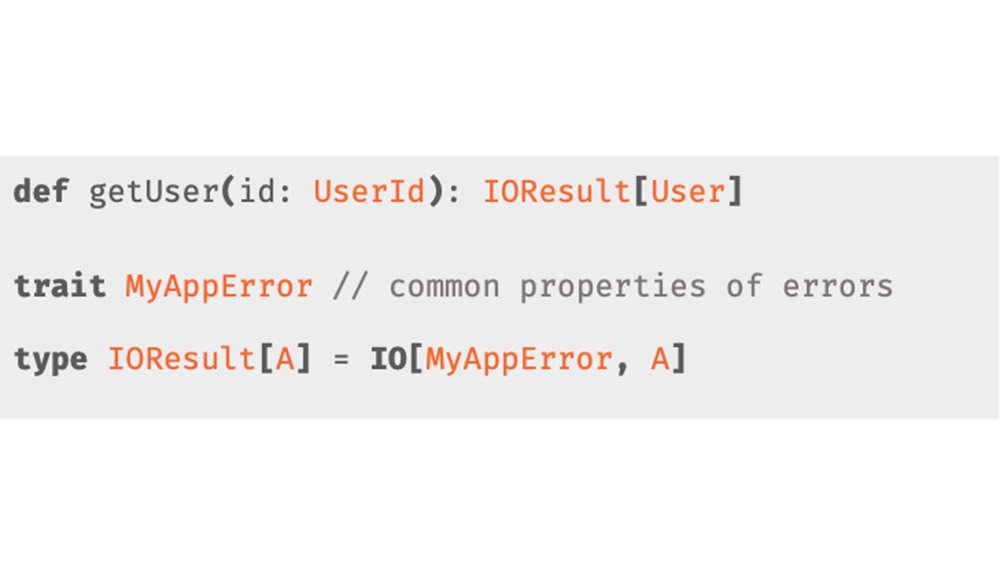 Use a dedicated error channel :

3 — Models are false by construction 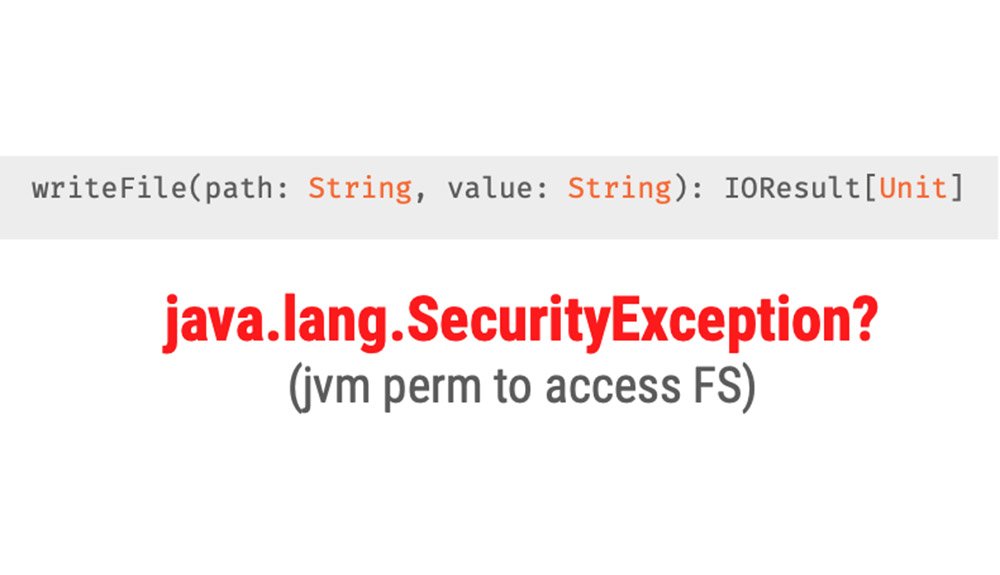 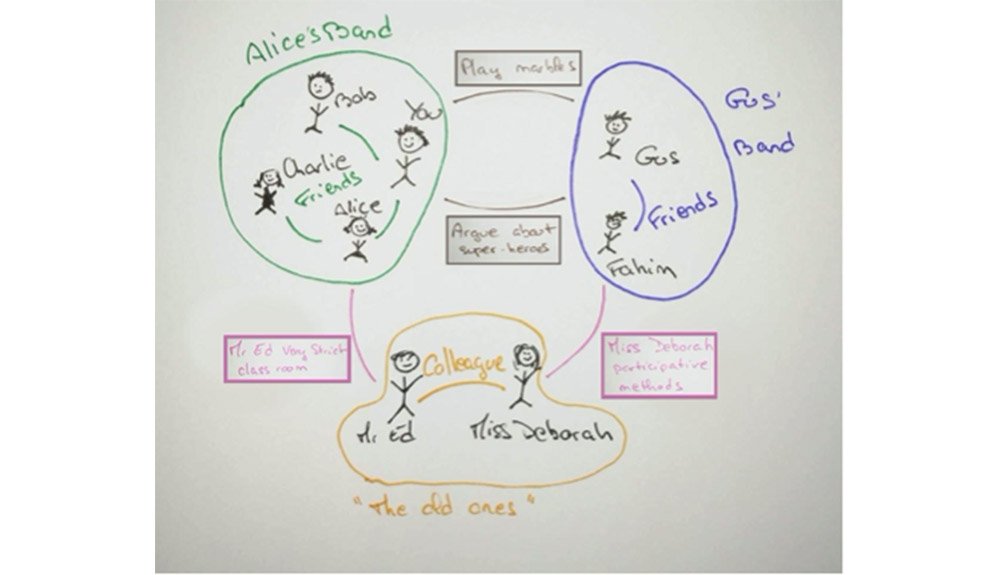 A school of systems

BOUNDED group of things, with a NAME, Interacting with other systems 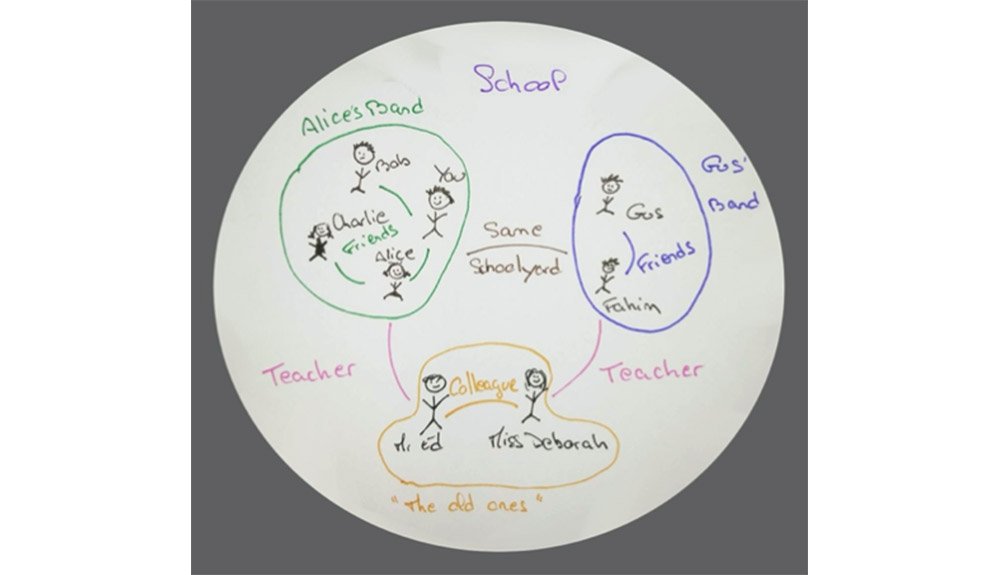 Nothing exists beyond horizon

Systems have horizon. Horrors lie beyond. 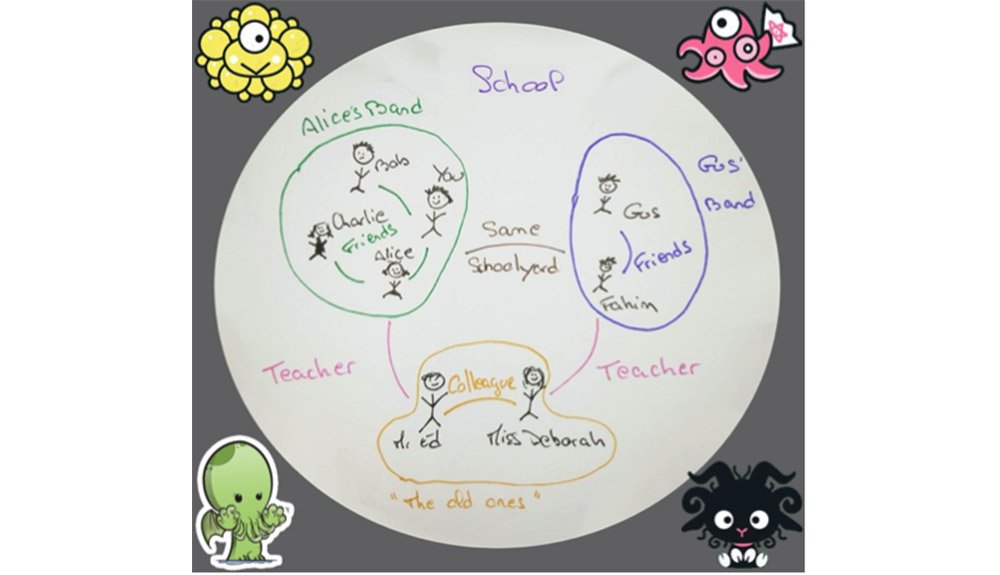 Horizon limit is your choice — by definition 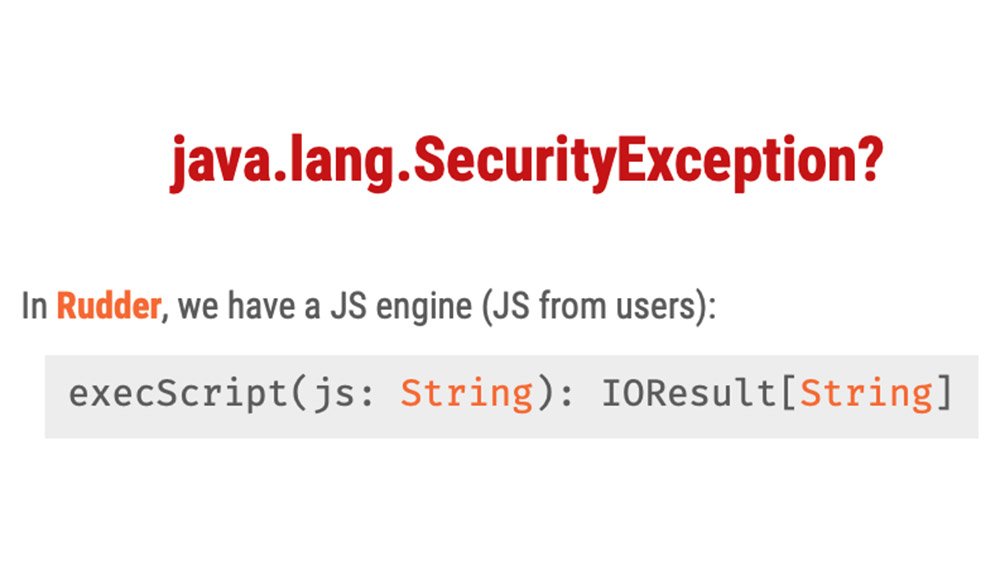 … but nowhere else in Rudder. By our choice.

4 — Use systems to materialize promises

Program to strict interfaces and protocols

A bit more about systems 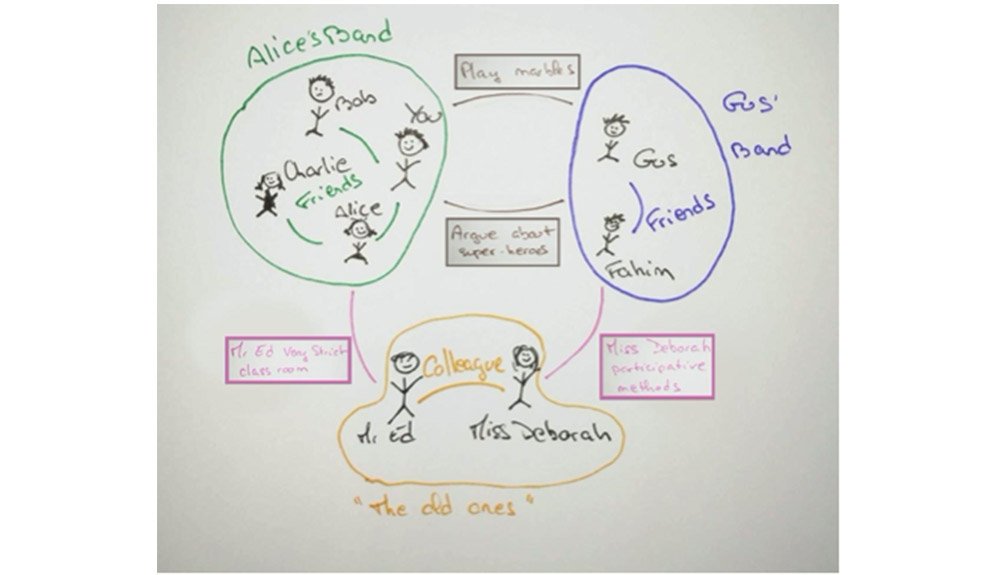 BOUNDED group of things with a NAME Interacting via INTERFACES by a PROTOCOL with other systems and PROMISING to have a behavior. 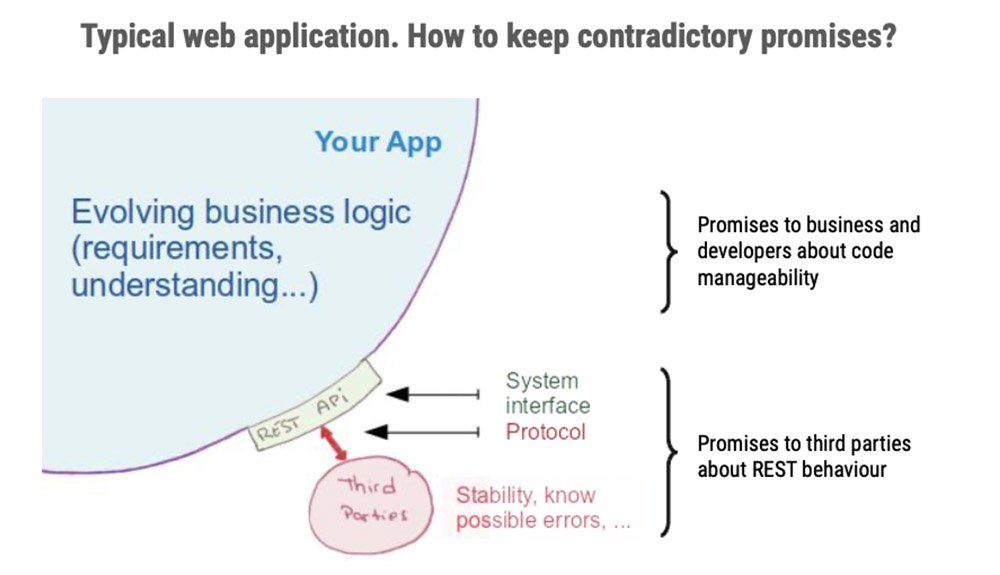 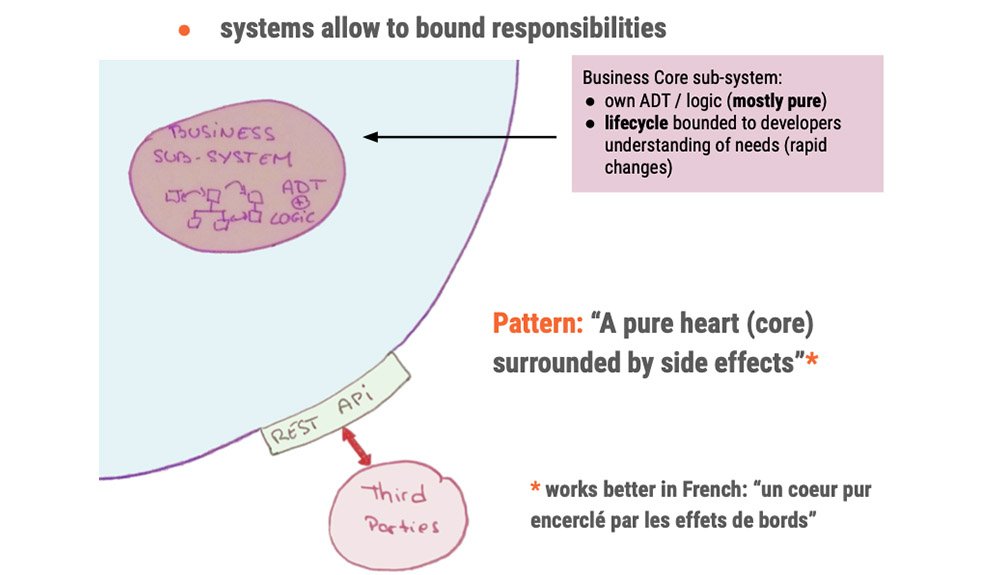 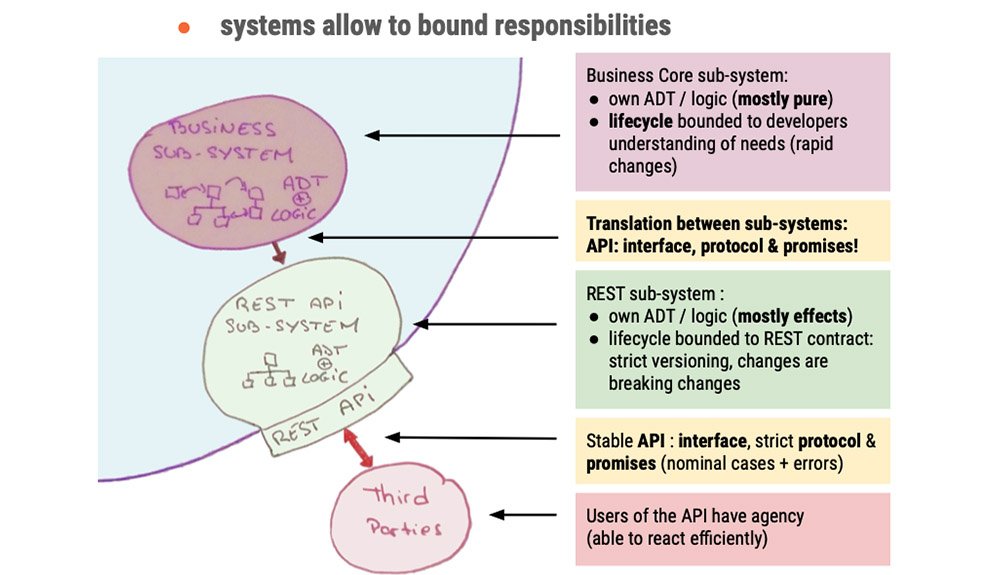 *make errors relevant to their users

5 — Make it extremely convenient tu use

Unpopular opinion : Checked exceptions are good signal for users. Who likes them ?

*exception are a pile of ambiguity

*no tooling, no inference, nothing

→ you need to be able to manipulate errors like normal code
→ where are our higher order functions like map, fold, etc ?

*automatic (in for loop + inference)
*or as expressive as nominal case!

*add all the combinators you need!
*it’s cheap with pure, total functions

You still have to think in systems by yourself, then ZIO provides : 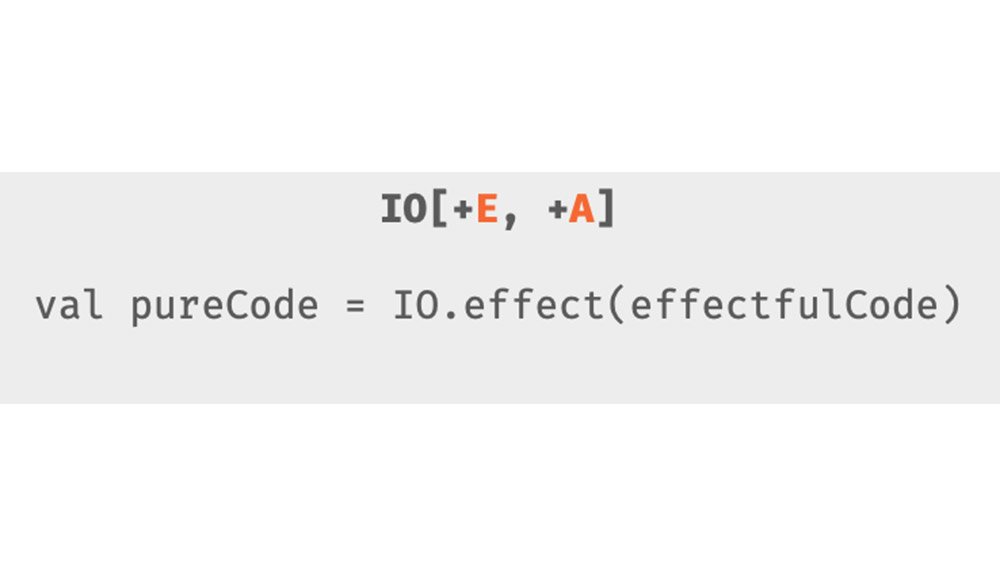 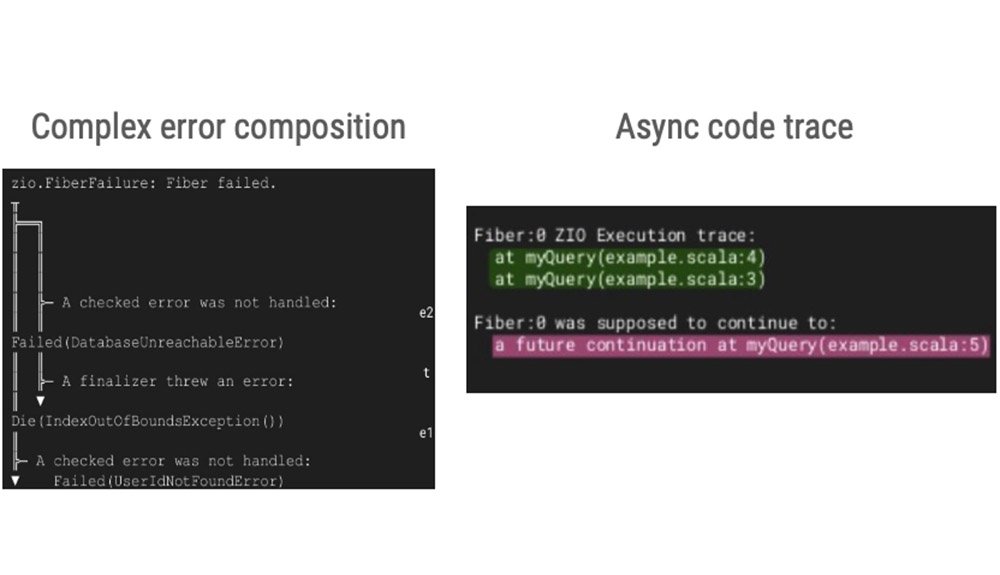 Everything work in parallel, concurrent code too !

In Rudder, with ZIO : We settled on that 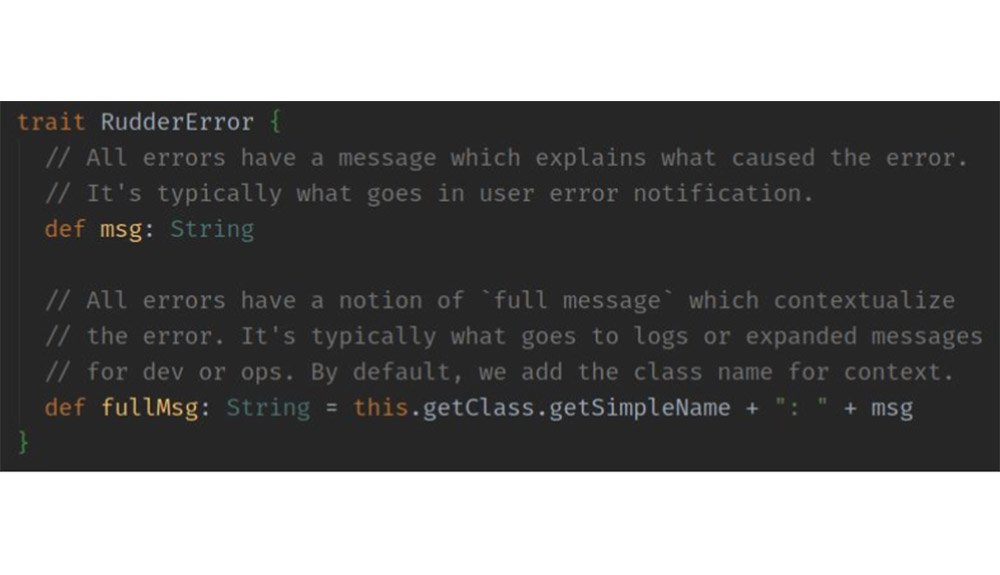 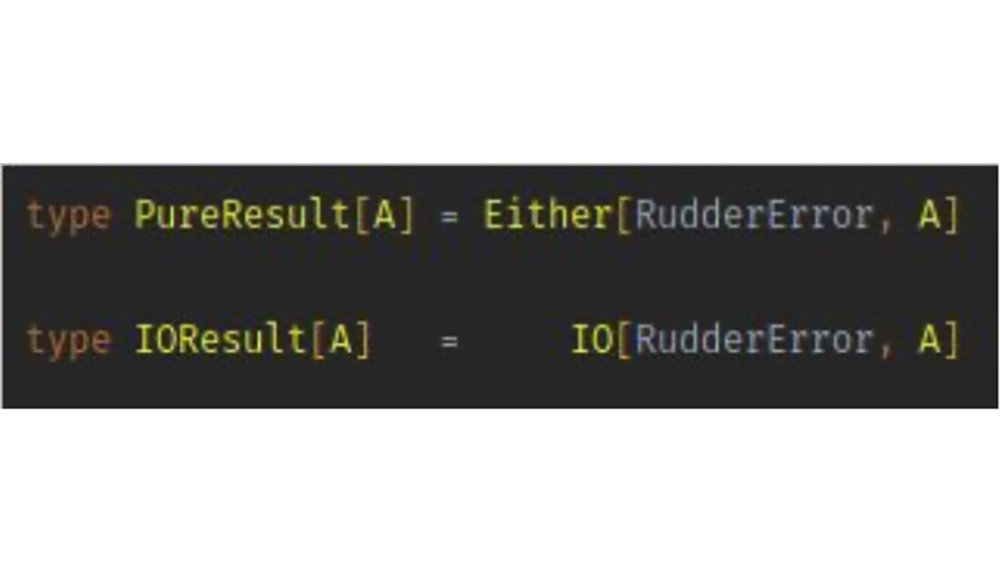 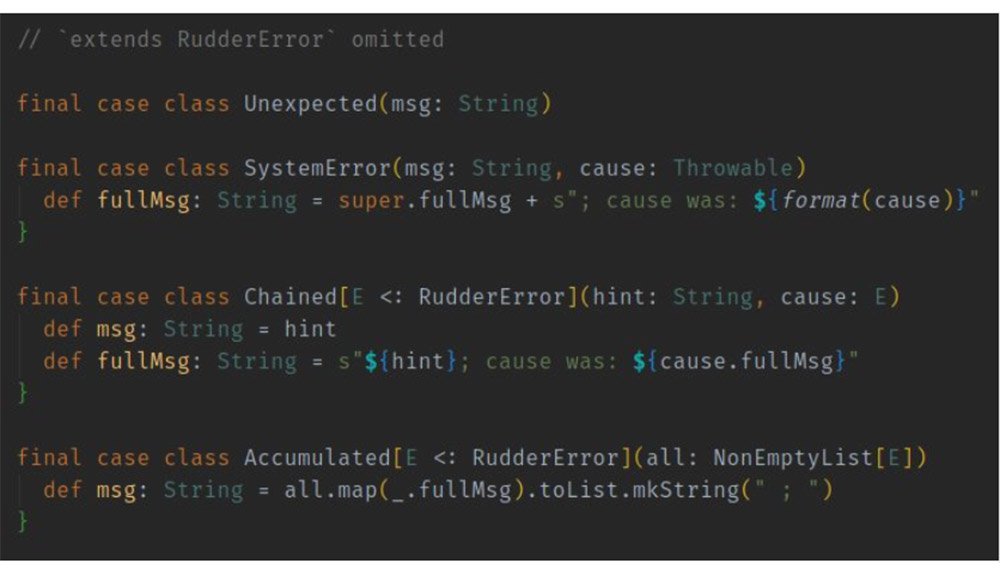 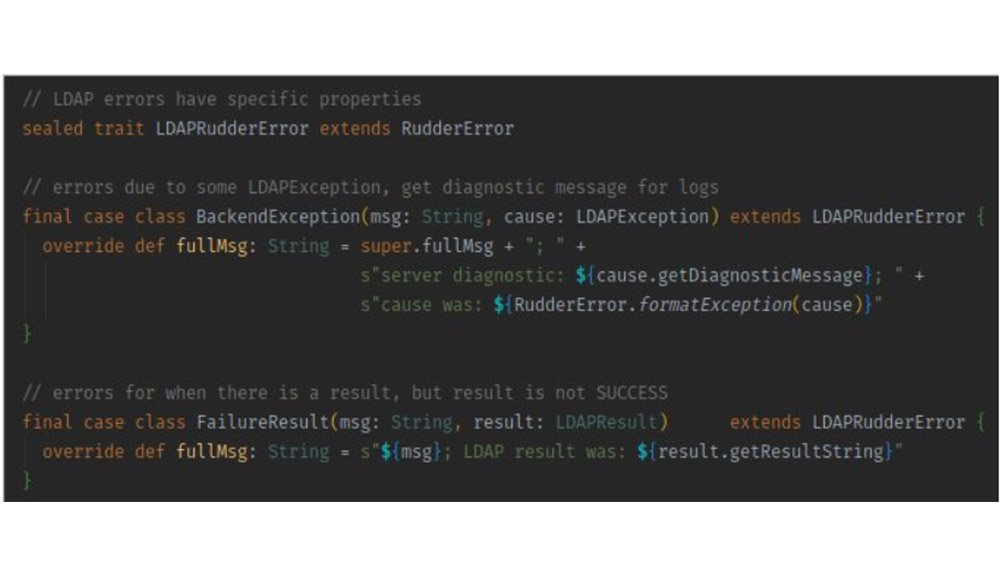 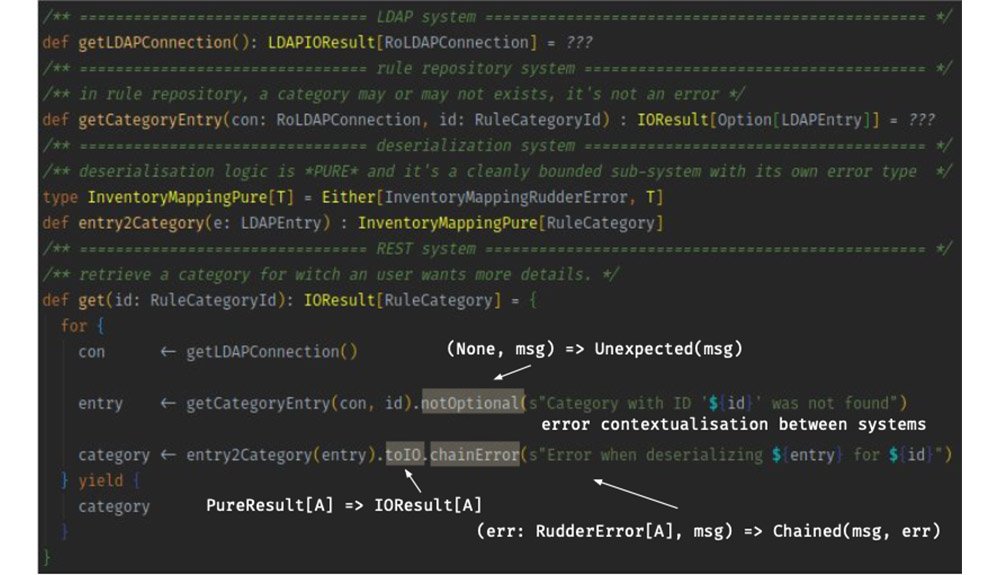 Some questions asked after the talk :

What about making impossible state unrepresentable from the beginning?

→ That’s a very good point and you should ALWAYS try to do so. The idea is to change method’s domain definition (ie, the parameter’s shape) to only work on inputs that can’t rise errors. Typically, in my trivial “divide” example, we should have use “non zero integer” for denominator input.

→ Alexis King (@lexy_lambda) wrote a wonderful article on that, so just go read it, she explains it better than I can

→ We use that technique a lot in Rudder to drive understanding of what is possible. Each time we can restrict domain definition, we try to keep that information for latter use.

→ Typical example: parsing plugin license (we have 4 “xxxLicenses” classes depending what we now about its state); Validating user policy (again several “SomethingPolicyDraft” with different hypothesis needed to build the “Something”).

→ the general goal is the same than with error management: assess failure mode, give agency to users to react efficiently.

→ There’s still plenty of cases where that technique is hard to use (fluzzy business cases…) or not what you are looking for (you just want to tell users that something is the nominal case, or not, and give them agency to react accordingly).

→ no, SystemError is here to translate Error that need to be dealts with (like connection error to DB, FS related problem, etc) but are encoded in Java with an Exception. SystemError is not used to catch Java “OutOfMemoryError”. These exception kills Rudder. We use the JVM Thread.setDefaultUncaughtExceptionHandler to try to give more information to dev/ops and clean things before killing the app.

You have only one parent type for errors. Don’t you lose a lot of details with all special errors in subsystems losing the specificities when they are seen as RudderError?

1 — no common super type means no automatic inference. You need to guide it with transformer, and even if ZIO provide tooling to map errors, that means a lot of useless boilerplate that pollute the readability of your code.

2 — there is common tooling that you really want to have in all errors (Chained, SystemError, but also “notOptional”, etc). You don’t want to rewrite them. Yes type class could be a solution, but you still have to write them, for no clear gain here.

3 — you are fighting the automatic categorization done by the compiler in place of leveraging it.

4 — The gain (detailed error) is actually almost never needed. When we switched to “only one super class for all error”, we saw that “Chained” is sufficient to deals with general trans-system cases, and in some very, very rare cases, you case build ad-hoc combinators when needed, it’s cheap.

→ So all in all, the wins in convenience and joy of just having evering working without boilerplate clearly outpaced the not clear gain of having different error hierarchies.

→ The problem would have been different if Rudder was not one monolithic app with a need of separated compilation between services. I think we would have made an “error” lib in that case.

We use Future[Either[E,A]] + MTL, why should we switch to ZIO?

→ Well, the decision to switch is yours, and I don’t know the specific context of your company to give an advice on that. Nonetheless, here is my personal opinion:

1 — ZIO stack seems simpler (less concepts) and work perfectly with inference. Thus it may be simpler to teach it to new people, and to maintain. YMMV.

2 — ZIO perf are excellent, especially regarding concurrent code. Fibers are a very nice abstraction to work with.

3 — ZIO enforce pure code, which is generally simpler to compose/refactor.

5 — pertinent stack trace in concurrent code is a major win

But at the end of the day, you decide!

How long did it took to port Rudder to ZIO?

1 — we didn’t started from nowhere. We were using Box from liftweb, and a lot of the code in Rudder was already “shaped” to deal with errors as explain in the talk (see https://issues.rudder.io/issues/14870 for context)

3 — we did some major refactoring along the lines, using new combinators and higher level structures (like async queues)

4 — we started in end of 2018, when ZIO code was still moving a lot and we switch to new things we when became available (ZIO 1.0.0 is around the corner and it as been quite stable for months now) 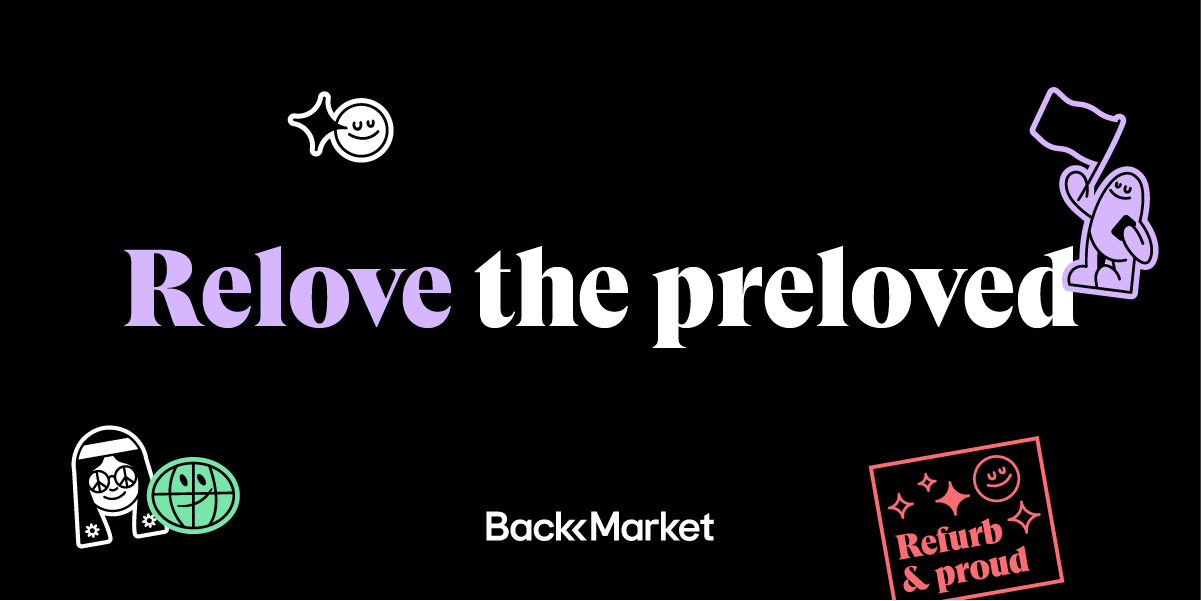 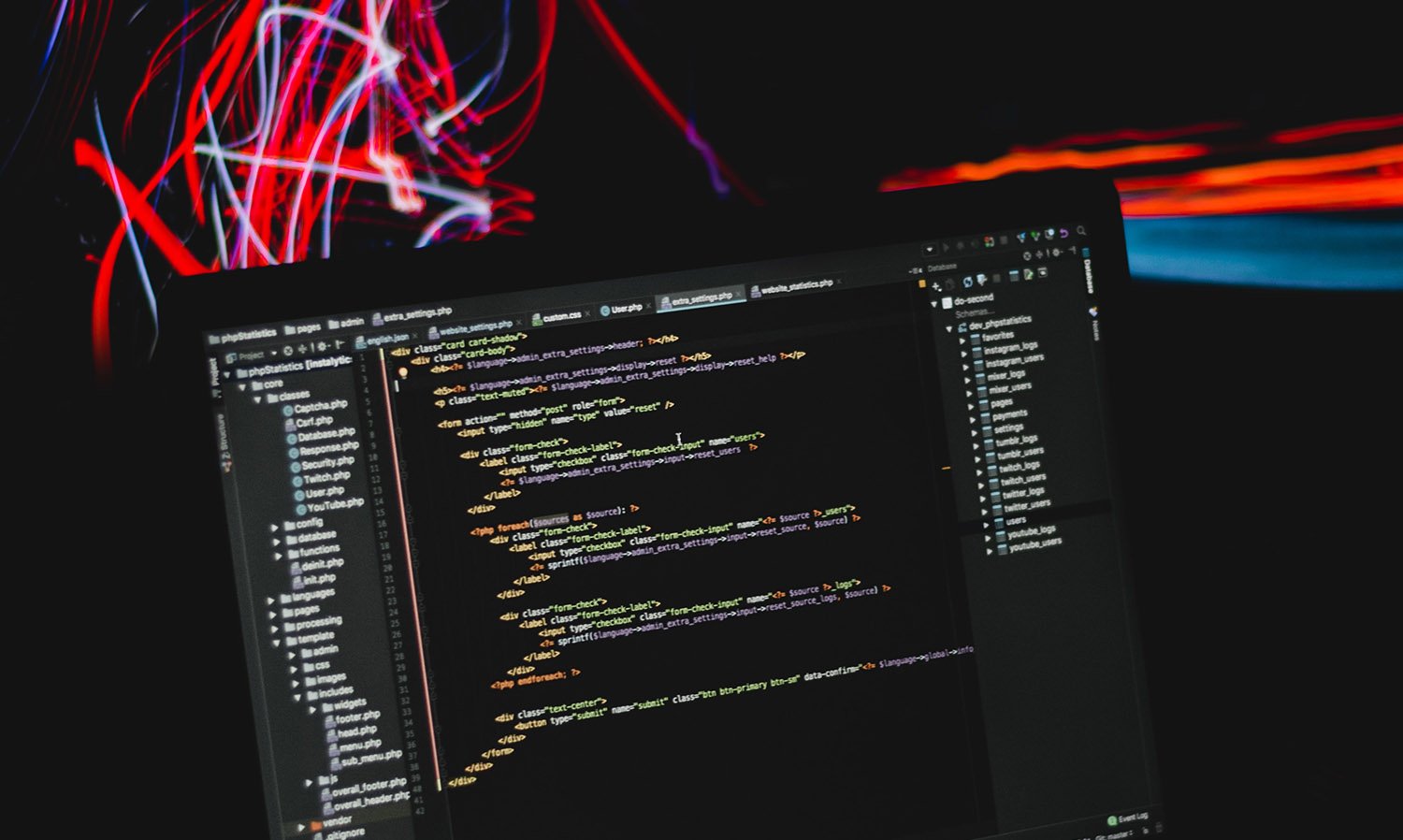 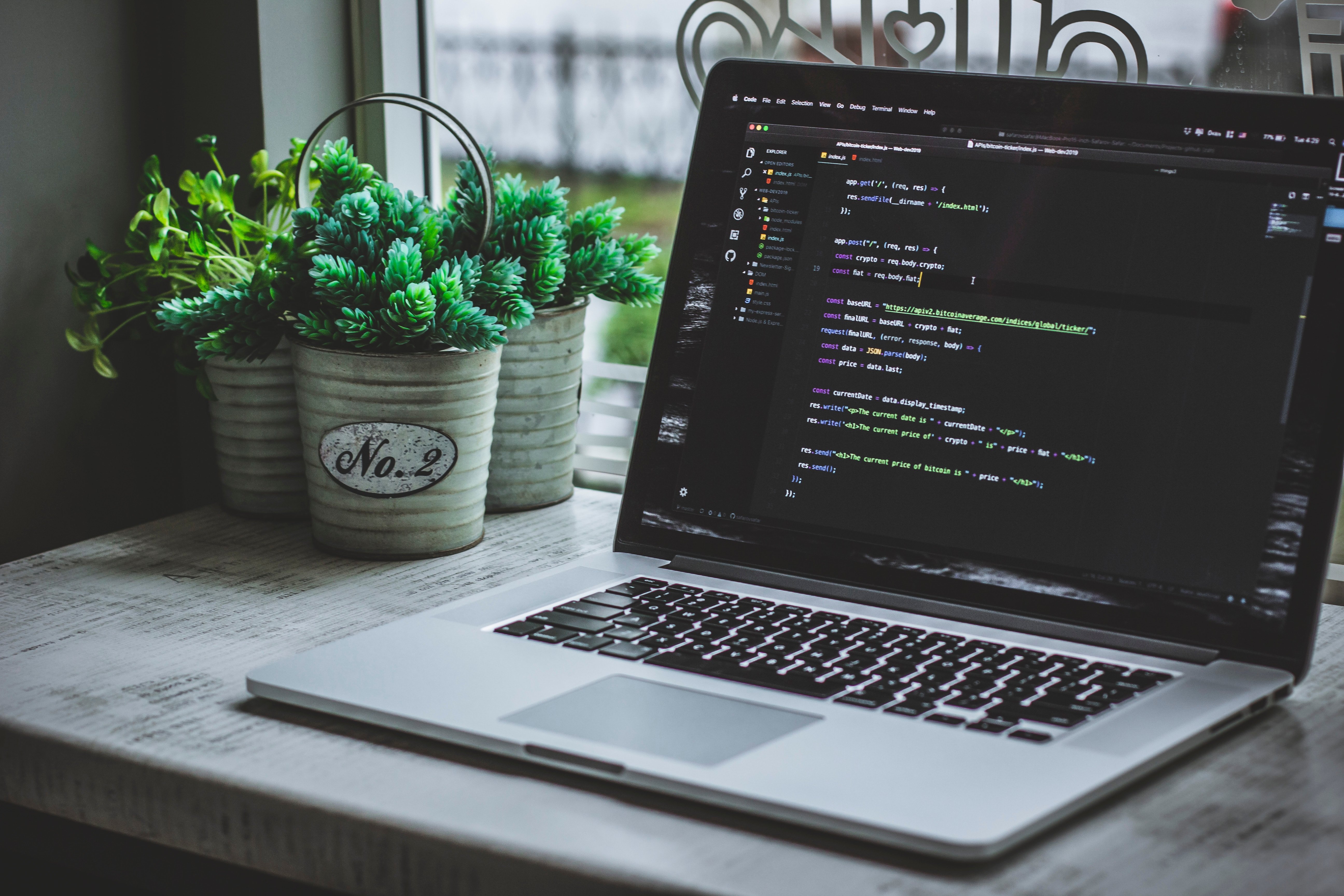 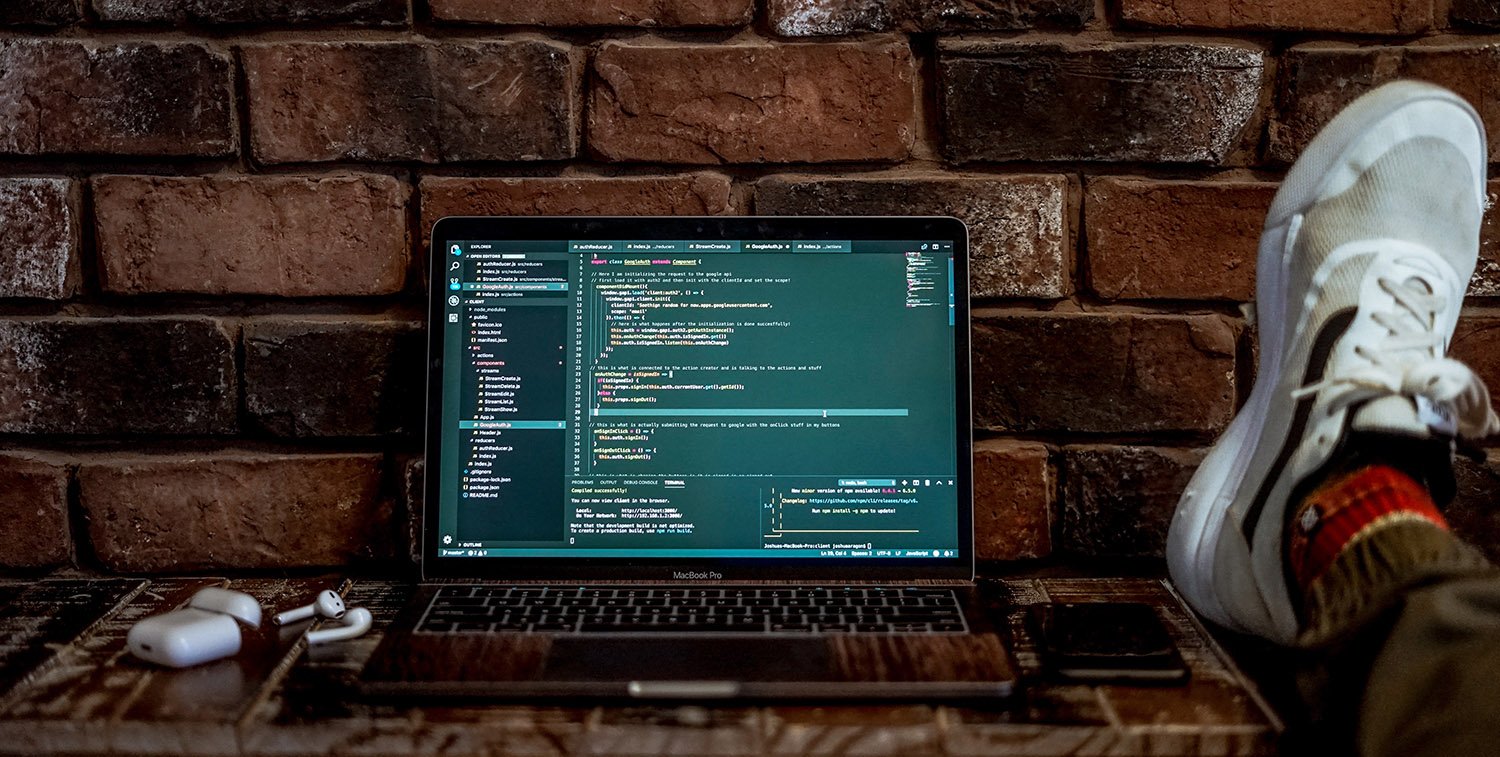 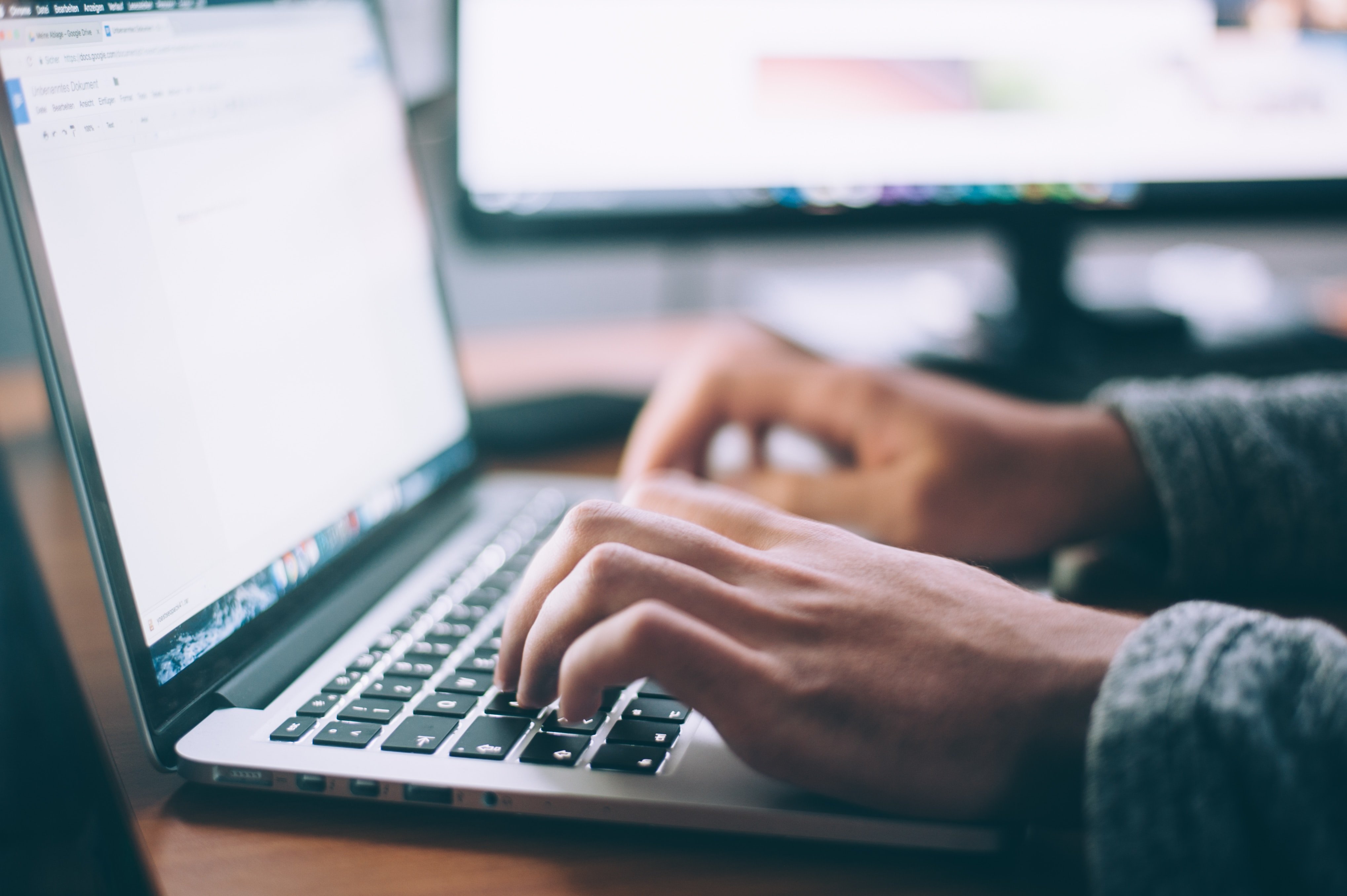